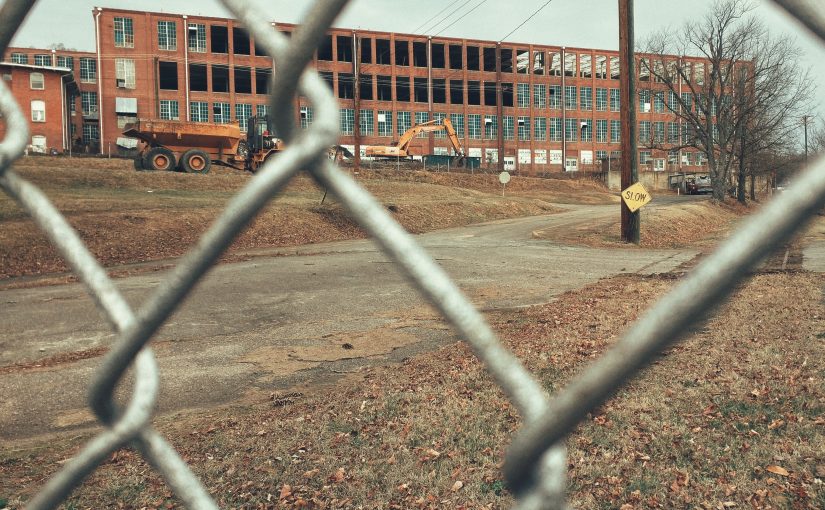 Regardless, I continue to be proactive moving forward.

On February 1, 2017, I walked up and down Main Street to gather evidence about the current condition of these spaces.

Below are the empty (or soon to be empty) spaces, as well as those that are clearly listed for sale or rent, even though currently occupied at the time of my walk.

This has been the home of the Elkin Tribune for as long as I can remember.  I can’t confirm what the future of the local newspaper is, but the fact that the building is for sale seems troubling.

I’ve spoken with the owners of this building in the past week, and the current occupant, shown going out of business, is indeed leaving the location soon.  My current understanding, based on conversation with the owner, is that there is not another business lined up to take over the space.

This building has been sitting empty for quite some time.  The paper in the windows makes it difficult to tell if any progress is being made with renovations or occupancy by a new business or businesses.

This building is owned by the same people that own 206 East Main St.  The Wanderlust Studio is a recent addition, the first tenant following an extensive and costly renovation conducted by the owners.  The basement, 122 B, is available for rent.  I’ve toured the space with the owners, and it has a certain speakeasy vibe that would be a great space to open a jazz bar or taco shop.

The tile work on the front of the building is a tangible testament to the amount of time, energy, and dollars the owners have invested in the space, with a sense of aesthetic and sophistication that should serve as a model for the rest of Downtown Elkin.  Having lived for six years in Asheville, North Carolina, I can personally attest to the fact that this façade emanates the same sort of progressive Asheville vibe.

This space is for rent.

I don’t know much about its soon-to-be former occupants, or the owners of the building.  Apparently, they still want to send Hillary Clinton to prison, though.

The man who ran this rather expansive, yet seldom busy, shoe and boot repair shop recently died.  There is no telling what future plan for this space is.

This building has been on the market for nearly a year, at least, and it now appears that something is happening, as the signs have been removed, and there is visible evidence of cleaning activity happening inside.  There are apartments on the upper level, currently occupied.

107 West Main was recently an antiques shop.  We’ve had an overwhelming number of antique shops (or junk stores, depending on the eye of the beholder) downtown in recent years.

109 West Main has been a jewelry store since at least as far back as when I left Elkin for college in 1997.

As you an see in the photo above, Plums is holding its 21st Annual Closing Sale at 111 West Main St.  Plums is closing, and there is no word yet concerning any future tenant, or what the building owner may do next.

At 113 West Main, El Matador was open for a relatively brief period of time as a clothing store.  It has been closed for several months at this point, perhaps even a year.

Back in the autumn of 2015, there was quite a stir around this façade and empty lot.  The Elkin Town Commissioners sought to demolish the property, and several community members, in concert with the Main Street Advisory Board, sought to preserve and protect the space for future public development.3  However, not much progress has been made, as evidenced in the photo above, nor has much been published about any obstacles or progress since, as evidenced by the fact that, as of this writing, an affinity page on Facebook has not been updated since 2015.4

These three stores have been empty for some time.  118 West Main was recently a baseball memorabilia shop, among other various “collectibles” and sundry things.  Based on current signage, it’s not clear if all three units are for rent, or just 120 West Main.

There’s no telling what condition the upper level is in.  The louvered windows seem salvageable, though.

The Thomas Kinkade Gallery at 113 East Main St has been shuttered for years.  No sign of change anytime soon.

115 East Main is clearly for lease, as shown in the photo above.

207 B East Main St is currently empty, and there is no sign in the window to indicate status or future plans.

Here are the tax value data for the properties listed above:

These values are readily available on the Surry Tax Map.5

Many thanks to my business partner and friend John Wiles for compiling these data today.

Based on these data, we can clearly define this problem in financial terms, allowing us to collectively and publicly discuss solution options in a clear, pragmatic fashion.

If we allow for a 1.5x factor in purchasing costs, as well as an average of $250,000 per property in renovation costs, the total financial cost of purchasing and renovating these properties is $4,063,675.

For each of these empty spaces, we have two viable options in the near term: 1) secure tenant businesses in lease agreements, or 2) find investors to purchase and renovate the buildings – for their own businesses or to lease to business tenants.

In either case, we currently have 18 spaces that need attention.  Regardless of which tenants/owners come to occupy these spaces, the real question is: What are the types of businesses that Elkin needs to bring downtown?  This question emphasizes the importance of contextualizing the pragmatics of the identified problem in a way that lends itself to a viable, sustainable, resilient future for the Town of Elkin in this post-industrial society.

A few points to ponder, regarding contextualization of this post-industrialism and our increased understanding and awareness of the finite resources within this planet, our home: Localism6, Transition Towns78, and Permaculture Cities9.

Note: If you’re interested, I’ve got copies of The Transition Handbook and Permaculture Cities on hand.  Each of these books can easily be read in a weekend, and both are readily available and affordable via the usual online stores.  You can also special order them from your local bookstore, if you’ve got one in your town.  And, if you’re local to Elkin, I’ll happily lend you my copies to read.  Let me know. 🙂

Based on this contextualization, we need to collectively establish a flexible longitudinal (10-, 20-, 30-, 50-year) growth plan for the future of Elkin – a plan that is designed to be dynamic and adjustable based on frequent analysis and consensus.  Such a plan would follow the tenets of systems wisdom established by Donella Meadows10, such as establishing feedback policies for feedback systems.

We’re watching Chatham Manufacturing Company, the past industrial vitality of Elkin — the very reason that Elkin managed to subsist and flourish as a town into and beyond the 1900s — be demolished.  The citizens of this community have mixed feelings about this process.  I see it as an opportunity; a dangerous opportunity to which we must pay constant attention.

In my next post on this topic, I’ll explore one potential manifestation of this opportunity.

We can entice young families from across the United States (and, frankly, across the world) to move here and work together to invest time, money, energy in this new blank slate we’re establishing in post-industrial Elkin.

We can serve as a model for all other post-industrial small towns in the United States.

What Am I Doing Today, Moving Forward?

In the meantime, I’m taking action in many ways, including the following three things.

With aforementioned partners, in early 2015, I purchased the southern entrance to Elkin.  We’re renovating and revitalizing the space into a local-first, progressive, environmentally focused, socially equitable secular hub for the future of progress in our town.

We also want all the entrances to our town to exude aesthetic sophistication and ecological resilience, and we hope to serve as a model.

This Too Shall Pass

Last November I hosted the first “This Too Shall Pass” community gathering at 205 South Bridge St.  It was not well advertised, and thus garnered a relatively small crowd, but it was a powerful small crowd.  We’re continuing the effort this year, with several events to celebrate the intersection of so many communities: river paddlers, trail hikers, home brewers, artisans and makers, local organic farmers, and musicians.

In addition to traditional printed flyers, I’m using Eventbrite and various social media platforms to manage and market the “This Too Shall Pass” gatherings for 2017 and beyond, seeking to embody the principle of ambient findability11 as a digital model for other businesses and organizations in Elkin to entice the Millennial (and younger) populations to seek out and share genuine experiences in our region.

In January 2017, I launched a global digital media platform startup, hoping to prove that companies with massive revenues (potentially in the hundreds of millions within less than five years) can once again be launched in small towns — this time in a nearly-infinitely scalable fashion.

Knedia is an experiential, data-driven, knowledge-focused digital platform for the production, consumption, and discussion of media across modalities.  Here’s an introductory video (produced locally in Elkin):

Stay tuned for more details as the company progresses.